If I Retreat, Shoot Me 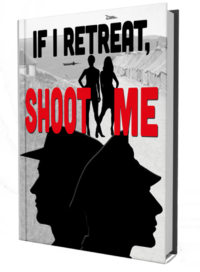 Side with the English? Never!

The sibling rivalry between brothers Pierre and Jan Rousseau escalates when the Smuts Government declares war on Nazi Germany. Pierre, the charming extrovert, chooses the more glamorous option, heading ‘Up North’ with the Air Force but his equally good-looking rightwing brother Jan joins the militant wing of the Ossewa Brandwag.

The story tracks their adventures during the conflict, reaching a climax when Pierre survives a spell ‘on the loose’ in Italy and returns home.

It portrays the deep division World War II created between groups and individuals in South Africa and the life-changing impact it had on many lives.

You’ll be fascinated as you follow the brothers’ hairy – and often romantic – adventures.

I enjoyed being reminded of the complex nature of war – and especially the disastrous consequences of limited access to information had for the world at large. It’s hard to imagine in this day and age of tweeting and instant messaging that there were times when people sincerely didn’t know the truth before it was too late. (Wir haben nicht gewusst!)

DAVE’S BOOK IS AVAILABLE FROM ALL GOOD SOUTH AFRICAN BOOKSTORES.