The Khaki Boer by Dave Baker 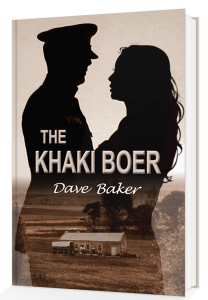 Having spent a few weeks with his family on their sheep farm in Dorset recovering from the exigencies of the Anglo-Boer War, Jack Whitely embarks on a ship sailing for South Africa, intent on pursuing the sliver of hope shown him by the lovely nurse, Rachel du Toit, who had made the period of his enforced stay in Ladysmith during the siege a good deal more than bearable.

He becomes known as the Khaki Boer as he thrives on the challenges and joys of farm life in Natal. However, his blissful existence becomes tainted when Britain declares war on Kaiser Wilhelm’s Germany, and he is torn between loyalty to the country of his youth and the little family he cherishes.

There is only one thing better than a novel by Dave Baker and that is a sequel to it.

If you were one of the many who read and loved Baker’s book The Tame Khaki, you will be delighted to know that he has now published its sequel, whose title is The Khaki Boer.

While the original book followed the fortunes of the young Englishman, Jack Whitelaw, in the Anglo-Boer War, during which he was injured and met the beautiful Dutch-speaking nurse, Rachel du Toit, the sequel begins as Jack and Rachel, now happily engaged, experience the aftermath of the war with its tragic memories of suffering and death in a British Concentration Camp. As hope for a final peace between the two countries gathers momentum, Jack has first of all to face up to meeting Rachel’s Dutch-speaking family, then to make preparations for the restoration of their homestead which had been devastated by Kitchener’s controversial ‘scorched-earth’ policy.

The description of the final pangs of the war with on the one hand the bittereinders and on the other the hensoppers is vivid and authentic. Our characters study the Peace Treaty with deep interest, and times are looking up for families having divided loyalties.

Before Jack and Rachel’s wedding, Jack takes Rachel to England to meet his family. As with all the author’s background material, the description of the voyage in two directions on the luxury Union-Castle liners is every bit as authentic as his details of the political landscape in both countries in the years between the end of the Anglo-Boer War and the Great War in Europe.

It would spoil the enjoyment for readers to reveal any further details of the story. However, I must repeat some of what I wrote in my review of the original book. Dave Baker has continued his delightfully smooth, readable style, while still painting a clear picture of life in two countries over a century ago. Whether they are reading about life on a farm, or clothing for a wedding, or traditional foodstuffs, readers experience the odd sensation that they are travelling in a time-machine, so vivid and detailed are the descriptions.

Baker stays loyal to his main characters and perhaps more importantly, does not stray from his chosen ‘points of view’, those of Jack and Rachel. In my opinion, this style well suits a historical novel.

Readers will, I am sure, identify easily with Jack and Rachel and their friends and families. The love between the two main characters as well as their spiritual values are convincing and endearing.

Finally, the spread of subsidiary characters, of all races, can only be described as intriguing and fascinating.

To any new reader of Dave Baker novels I say: get ready for hours and hours of companionship with a novel that reaches new heights in historical fiction.

Due for released in August 2018 and available in all reputable South African bookstores.